A friend sent me this interesting article from the Wall Street Journal. Towards the end (5th paragraph from bottom) the writer mentions that people question whether or not it’s really yoga. My opinion is that only the person doing the practice can determine whether or not they are doing yoga. What do you think? Is yoga a set of practices or a state of mind?

Into the Wild With Yoga
An extreme athlete with no fixed address is pioneering a new form of yoga. Inside the world of adventure addicts.
By ALEXANDRA ALTER
April 5, 2008; Page W1 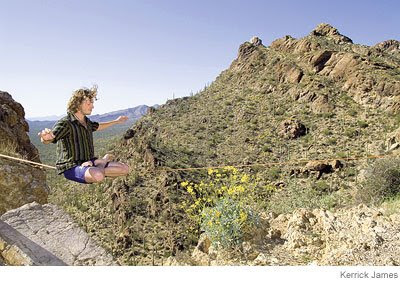 Jason Magness pulled up to the park in an old sedan stuffed with clothes, climbing gear, books and his Irish punk cassette tapes. He was temporarily homeless after breaking up with his girlfriend but in good spirits. He uncoiled a springy nylon rope, lashed a taut line between two trees and hopped on barefoot. The rope bounced like a trampoline. Then he sat cross-legged in a dead-still lotus posture, suspended 3 feet above the ground.

People stopped to stare. From a distance, he looked like he was levitating.

Mr. Magness is a charismatic adventurer and yogi with wavy, sun-streaked brown hair, blue-gray eyes and a narrow, tanned face. His exploits have made him a legend in the small underground of adventure sports. He’s also the innovator of slackline yoga and is one of its few masters. More difficult than tightrope walking, it involves holding yoga poses while balanced on a flat rope the width of a thumb. Since he and a friend invented the practice three years ago, Mr. Magness has given demonstrations at yoga conferences, released an instructional DVD and taught 2,000 people at workshops across the country. Although it is unlikely to become a mainstream sport — just five people teach it — it is catching on among the most agile of yoga devotees.